In the last two weeks I have had the opportunity to sit in a theater to watch 3 different films…
Here are my reviews of each:

KINGSMAN: SECRET SERVICE:
I was invited to see this flick by a buddy of mine and I went in blind because I had not even seen a trailer of it before walking into the theater. It was rated R and I expected some violence and language, but what I didn’t expect was the preview trailer before the film. On the screen came the preview of the movie “unfinished business” and I was subject to non stop cursing from the start and it ended with a full nudity sex scene that was meant to be funny. Sorry Hollywood, it wasn’t funny at all. As a matter of fact it almost spoiled my movie. When you go to a film with an expectation of the content that is in it and then met with a trailer that is more inappropriate than the movie itself, you feel cheated and ticked off.
So enough of that rant. Lets get to the movie review. It started off amazing with a smart james bond type of script. It was slick, creative and heady. As soon as I got comfortable with that Samuel Jackson came on the screen as the bad guy that can be best described as the cross between Russell Simmons, Snakes on a plane, and a Dr. Evil with a lisp. I was so entranced with this film and when Sam Jackson showed up I could no longer take the movie seriously. I decided to sit back and attempt to calm my spy alter ego down. I found myself entertained, but no longer impressed. The violence was over the top and almost cartoony which ruined the smarty spy aspect. At the end of the movie we find out a mechanism in a persons neck could make their head explode. Ok.. That actually does make sense… and then we actually see 200 peoples heads explode. Do they explode like you would anticipate with blood and brains all over and us wanting to throw up from disgust? Nope… they explode with colored chalk dust in a cloud of purple and blue rainbows followed by a mushroom cloud of disappointment. To cap it all off, because I can only assume they wanted to compete with the “coming soon trailer” before it they decided to throw in a butt shot in the last 2 min for absolutely no reason at all.
Conclusion – I tried… I really tried… Sam Jackson and the color chalk exploding heads made a really cool spy thriller into a fantastical dumb mess. – 2 of 5 stars

THE IMITATION GAME:
My wife and I had a date night last week that started off with a nasty, moldy piece of toast at IHOP. It was essential that this movie changed the trajectory of my evening. THANK GOD IT DID! I am a huge fan of Benedict Cumberbatch, having first become a fan with the BBC show “Sherlock”. I don’t have a ton to say about this movie because there is literally nothing about it I could complain about. The story was based on a true one and while I had heard pieces of this, it was amazing to watch what happened. The acting was extraordinary! The script was well written, believable, inspiring and obviously a labour of love. I didn’t want this movie to end. It is not a traditional war movie because it is centered around a bunch of code breakers. This movie is a masterpiece.
Conclusion – If you don’t see this film I will come to your house and smack you. 5 of 5 stars

JUPITER ASCENDING:
Do you see the picture I chose for this post with the girl, Jupiter, falling from a building and screaming that somebody would save her from the pending doom? That is exactly how I felt watching this movie. I really wanted to see this movie. I really wanted to like this movie and I really wish I had bought a coffee to bring into the theater because my friends to the left and right of my both fell asleep. The PG in the PG-13 rating for this movie I’m sure stood for PIECE OF GARBAGE! Visually it was mind-blowing and memorizing even if the laser guns never seemed to hit anything or anybody. As I was being entranced by the visual effects, the space ships and the intergalactic steam punk world I was bombarded by quite possibly the worst script ever written in movie history. It was like that scene in the wizard of OZ where Dorothy was told to “pay no attention to the man behind the curtain”. The Visual effects were designed to attempt to distract us from a script that was obviously written by a panel of 4 year olds. Somewhere in the middle of the movie, as we were all woken up from our slumber in the utter boredom, it became apparent we were watching a Space twilight movie. Every time there was a cool fight scene I would sit up excited to finally get into the movie, only then to find myself scratching my head wondering why something so beautiful was so boring and contrived. There are three major bad guys who individually have a climactic scene. Oddly enough though the scenes end with nothing climatic ad all and cut to another place in space. As a movie watcher you are tossed around, jumbled up and forced to ingest this story on account you don’t want to waste your $9 by walking out.

Caine is falling in love with Jupiter, but Doesn’t believe they have much in common. Jupiter disagrees…

Caine Wise: Your Majesty, I have more in common with a dog than I have with you.
Jupiter Jones: I love dogs

ARE YOU KIDDING ME?! “I LOVE DOGS” as she leans in and tries to kiss him? all this script convinces me is to write a PSA to all the kids out there. Ahem… KIDS… DON’T DO DRUGS and STAY IN SCHOOL or else you will write dumb crap like this!

There is even one scene where she asks CAine “do you want to bite me now?” He doesn’t bite her, thankfully, but this MOVIE sure BITES!

Conclusion – I could literally talk about every every moment of this ‘dog dung wrapped in a beautiful package’, but It’s best I put it simply. DO NOT see this movie! Let me give you some recommendations of other crappy movies instead so you can grasp how bad this was. Battlefield earth, Leonard part 6, BioDome, Catwoman, Rabid Grannies. Are you tracking with me here? 2 hours & 5 min you will NEVER EVER get back.  0 of 5 stars

Dad is Fat: A book review

Dad is Fat: by Jim Gaffigan

“In Dad is Fat, stand-up comedian Jim Gaffigan, who’s best known for his legendary riffs on Hot Pockets, bacon, manatees, and McDonald’s, expresses all the joys and horrors of life with five young children”

I am a HUGE gaffigan fan. I love his standup comedy and his outlook on life. The dude straight up cracks me up. I remember the first time I heard his “Hot Pockets” sketch a few years ago and I am pretty sure Jim still owes me a new pair of pants.

Needless to say I was so excited to get this book, and after rave reviews from friends I could not wait to dig in.

So I jumped into reading it through the lens of a chunky dad with 4 kids. I found myself smirking and thinking “yeah thats kinda true… I would agree with that”. I got about 3 quarters of the way through and one of the quotes on the back came back to me.

The quote said the book was “laugh out-loud funny”. Here I was almost done with the book struggling with the realization that not only was I not laughing out-loud, but I was pretty sure I didn’t laugh inside either.

In the end it was a nice read with some good humor about what it is like to be a dad with a ton of kids and married to an amazing wife…But thats not what I signed up for. I wanted an excuse to buy new pants and I didn’t get it.

Disclosure of Material Connection: I received this BOOK free from Blogging For Books to review. I was not required to write a positive review. The opinions I have expressed are my own. I am disclosing this in accordance with the Federal Trade Commission’s 16 CFR, Part 255 : “Guides Concerning the Use of Endorsements and Testimonials in Advertising.”

September 22, 2009 — 1 Comment
Today, the new, long-awaited album from the David Crowder* Band, Church Music, hits the streets.
It’s a good CD and a few of us differ on our opinions on it. Go read the review before you buy the CD!
The Joint brings you another multiple viewpoint review of this fantastic record. Check it out here.
DONT FORGET TO ADD THE JOINT TO YOUR FAVORITE RSS READER!!!

This CD can be purchased/listened to at:
i-tunes

All about Worship “plug”

I want to take a second and plug what my friends are doing.

Wisdom and Ben have recently added a new podcast member to the All about worship podcast. Darrell Evans. That is some awesome news.
Let me say that if you have not listened to this or checked out the live video interviews you are missing out. Click on image below for the podcast and also while you are at it sign up for their upcoming teleseminar.

Feel free to grab the graphics below and advertise this stuff on your site as well. 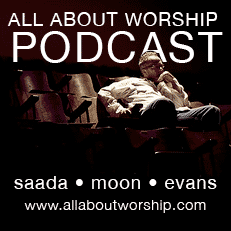 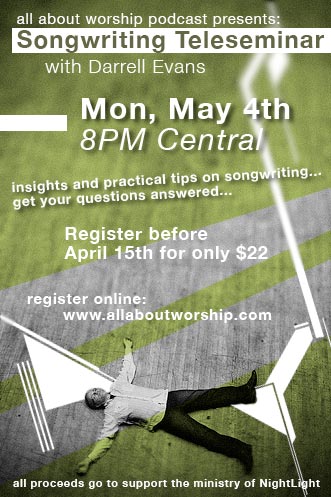