Last year I wrote an adaptation of the classic “twas the night before christmas” for a christmas eve service at my church. After much prayer, study and journeying with God over the last year I have revised and finalized this poem. I wanted to give families something they could read to their kids or even to other adults that would remind them during the season of the truth around Christmas. That we can see how amazing the father is by looking at His son. That God didn’t mess up but the gospel was ALWAYS plan A and oh how He loves us.

I hope to publish an illustrated book of this next year.

Below is the PDF of the poem if you would like to print it. 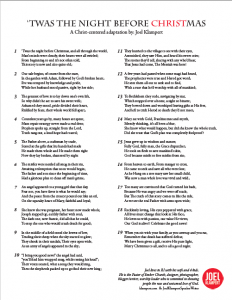 ‘Twas the night before CHRISTmas

‘Twas the night before Christmas, and all through the world,
Man’s minds were cloudy, their hearts were all swirled;
From beginning to end it’s not often told,
This story is new and also quite old;

Our tale begins, of course from the start,
In the garden with Adam, followed by God’s broken heart;
Eve was tempted by knowledge and pride,
While her husband stood passive, right by her side;

The greatest of love is to lay down one’s own life,
So why didn’t he act to save his sweet wife;
Ashamed they stood, pride divided their heart,
Riddled by fears, their whole world fell apart;

Countless years go by, many hours are spent,
Mans repair strategy never made a real dent;
Prophets spoke up, straight from the Lord,
Truth rang out, a loud hope had roared;

The Father above, a craftsman by trade,
Stared at the gifts that his hands had made;
He made them whole and He made them right
Now they lay broken, shattered by night

The misfits were nestled all snug in their sin,
Awaiting redemption that soon would begin;
The father and son since the beginning of time,
Had a glorious plan to clean off man’s grime;

An angel appeared to a young girl on that day,
Fear not, you have favor is what he would say;
And the peace from the creator poured out like an oil,
On the squeaky heart of Mary, faithful and loyal;

She knew she was pregnant, her heart now made whole,
Joseph stepped up, earthly father with soul;
The dark one, now frantic, did all that he could,
To stop the one who would crush death for good;

In the middle of a field stood the lowest of low,
Tending their sheep when the sky started to glow;
They shook in their sandals, Their eyes open wide,
As an army of angels appeared in the sky;

“I bring you good news” the angel had said,
“you’ll find him wrapped snug, while resting his head”;
Their voices soared, what a song they would sing,
Then the shepherds packed up to go find their new king;

They hurried to the village to see with their eyes,
Astonished, they saw Him, and heard his sweet cries;
The stories they’d tell, sharing with any who’d hear,
That Jesus had come, The Messiah was here!

A few years had passed when some magi had heard,
The prophecies were true and Herod got word;
He sent them all out to seek and to find,
With a ruse that he’d worship with all of mankind;

To Bethlehem they rode, navigating by star,
Which stopped over a home, a sight so bizarre;
They bowed down and worshiped leaving gifts at His feet,
And left to trick Herod so death they’d not meet;

Mary sat with Gold, Frankincense and myrrh,
Silently thinking, it’s all been a blur;
She knew what would happen, but did she know the whole truth, 
Did she trust that God’s plan was completely foolproof?

Jesus grew up in wisdom and stature,
Fully God, fully man, the Grace dispatcher;
He took on flesh to save mankind’s skin,
God became misfit to free misfits from sin;

From heaven to earth, From manger to cross,
He came to seek and save all who were lost;
As he Hung on a tree mary saw her small child,
Was now a man who’s love was vivid and wild;

Too many are convinced that God turned his back,
Because He was angry and we were off track;
But The truth of this story comes in like the tide,
As we see the real Father with arms open wide;

Recklessly loving, His eyes peppered with grace,
All lives must change that look at His face;
He loves us with passion, our value He views,
Our God is alive!! Celebrate the good news!

When you sit with your family, as you unwrap and you eat,
Remember that death has suffered defeat;
We have been given a gift, receive His pure light,
Merry Christmas to all, and to all a good night.