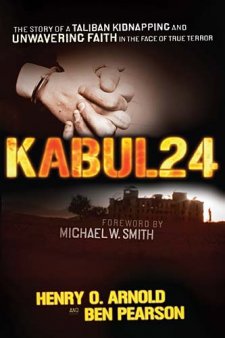 Kabul 24:
The Story of a Taliban Kidnapping and Unwavering Faith in the Face of True Terror
By Ben Pearson & Henry Arnold

I got this book a month or so back from Thomas Nelson publishing and honestly did not know what to expect.

What I got was more than just a story about Taliban Kidnappings. What I read was a story of hope and of faith that never faltered ever.

Description: The story of the capture and imprisonment of eight Western aid workers in Afghanistan by the Taliban.

For three months in 2001, the desperate plight of aid workers kidnapped by the Taliban in Afghanistan captured the attention of the world. With the growing specter of U.S. retaliation for 9/11, the Taliban and Osama bin Laden attempted to use their Western hostages as bargaining tools. What the captors did not count on was coming face-to-face with the enduring faith of people who know their only hope was in Christ.

Kabul 24 revisits their grueling interrogations, their sham trials before the Taliban Supreme Court, their peril during the bombing of Kabul, and the crushing sense that the world had abandoned them. It reveals not only the eight Westerners’ 105 days in captivity but also the gauntlet endured by their 16 Muslim coworkers who, after being taken to the notorious Pulicharki Prison, were beaten and tortured, having been accused by the Taliban of converting to Christianity.

I have known people in my life personally that have experiences like this.take from their families and homes. This true story about 8 western aids works getting kidnapped is absolutely amazing. I have read many testimonies similar, but for some reason I really connected with the people in this one.
It was amazing to see then much like Paul int the bible…they prayed and read the word and sometimes even sang in worship.

Overall it was a good read but very simple. The writing was a bit tedious at times and failed to capture my attention. I found myself identifying with the people and their plight but getting bored by the writing.

Sadly the writing style retracted from the inspiring story and at times made it a chore to read.